The Differences Between CBD vs CBN

The use of CBD oil is increasingly popular due to early studies reporting potential properties of cannabinoids for our general wellness and wellbeing.

Cannabinoids are found within the cannabis plant, yet the compounds and how they work are not to be confused.

With there being over 100 cannabinoids other than CBD in the cannabis plant, it is unsurprising that research has shown many of them have a range of properties that may be able to promote general wellness.

All of them interact with the body’s receptor system, known as the endocannabinoid system, which is why scientists are intrigued by their potential properties.

The most popular cannabinoids that you have most likely heard of are CBD and THC. However, there are several others – including CBN.

You are likely more familiar with CBD, yet today you will discover much more about CBN and the differences the two cannabinoids have.

In this guide you will discover:

Let’s take a closer look at what each cannabinoid is, how they may interact with our bodies, and what their differences are.

What's in this Guide?

Many assume CBD is an ingredient that can cause a ‘high’ effect as it is from the cannabis plant.

However, that is not true.

The compound found in the cannabis plant that causes the psychoactive side effects is THC, scientifically known as tetrahydrocannabinol.

Instead, CBD is a non-psychoactive cannabidiol.

CBD now comes in various forms due to its rising popularity in the health and wellness industry. Its most popular form is in oil or tincture. Other products that contain CBD include infused food and drinks, skincare products, and vape liquid.

There are many potential benefits of CBD oil that scientists are looking into – but for now, it is important to understand that cannabinoids from the cannabis plant work in different ways with the human body.

Many cannabinoids are interesting to scientists because of their interaction with the endocannabinoid system, which controls a number of other major systems in our bodies.

CBD is thought to interact with the CB1 brain receptor, a small protein that stimulates a cellular response within the brain and central nervous system.

The reason for CBD being the most popular is due to growing research. From this research, scientists have been considering whether CBD can encourage general wellness.

On the other hand, CBN (Cannabinol) is psychoactive.

CBN comes from the breakdown of THC, the cannabinoid responsible for the ‘high’ effect of marijuana, which is why it can alter the way your mind works when you have it in your system.

This might seem worrying – yet, some new research into CBN has found it may have important properties and ways of working with our body’s endocannabinoid system meaning it may boost our general wellness.

What Are The Pros of CBD?

Throughout its years being used in the health and wellness industry, CBD has been investigated by scientists because of the way it interacts with the endocannabinoid system.

Early research looks promising, but nothing is confirmed.

However, there are a number of pros of CBD vs CBN beyond the science of the two cannabinoids.

The World Health Organisation has confirmed that CBD is safe for public use and poses no potential for abuse.

Therefore, despite whether or not there are any potential benefits, consumers can use CBD products without any fears about it’s safety.

More and more people around the world are trying CBD every single day, and it has a great track-record for safety with millions of people regularly using cannabidiol products.

CBD is one of the few cannabinoids that is available in a variety of forms. Since results have been promising from early studies, many companies have infused all sorts of products with CBD.

CBD is now available in the following forms

There really is something for everyone.

However, epending on the type you use, the effects and CBD bioavailability may differ.

For instance, when using an oil via the sublingual method, which involves dropping the product under your tongue, CBD can get straight to the endocannabinoid system via the bloodstream.

As we’ve covered, CBD getting to the endocannabinoid system is part of the reason scientists are so intrigued by it’s properties.

Sublingually consuming any highly concentrated product, like CBD oil, helps increase the response time as it can enter the body quicker.

With infused food and drink products, the digestion process will slow down the interaction with the endocannabinoid system, meaning any potential bodily response will happen slower.

The best thing about CBD vs CBN, is that cannabidiol is not psychoactive.

Because of the structure of the CBD molecule, it does not react with the human brain in the same way as CBN (and the famous THC).

Because of this, people can use it freely (depending on the law), and not worry about their product influencing the way their brain is functioning.

CBD is also legal in many countries around the world because of it’s confirmed safety status and lack of psychoactive effects.

In contrast, CBN and THC are illegal in many countries because of their psychoactive effects.

What Are The Pros of CBN?

CBN comes from the breakdown of THC when it oxidises, typically after being stored for a while.

Cannabinol is not studied as much as CBD, yet some recent, early research suggests that CBN may have some interesting properties for the human body.

The pros of CBN include:

Whilst this doesn’t seem like a positive thing, we have to admit that the world is slowly opening up to marijuana use.

In some US states, Canada, Netherlands, Georgia, Uruguay and South Africa, recreational cannabis has been legalised.

We can reasonably expect that other countries will follow – perhaps even the UK.

Importantly, psychoactive properties of a compound doesn’t automatically make it dangerous – and some psychoactive chemicals may still encourage general wellness, including cannabinol and THC.

CBN is less psychoactive than THC, which may make it a suitable alternative in countries that aren’t quite ready for legalised THC.

However, CBN remains illegal in most countries in the world right now.

Could be less expensive

A key complaint many people have about CBD is the high price attached.

CBD products are generally more expensive because of the high-quality extraction processes and ethical, organic production in some cases which brings the price up.

As more and more people become interested in CBD, the price has risen even further because of supply and demand.

This means that if CBN is legalised in more countries, there may be a period of time when the price of CBN products is lower until they gain more popularity.

However, the production processes may still bring the price up.

What Are The Main Differences Between CBD vs CBN?

Both cannabinoids work by interacting with neurons and activating them, which can boost overall wellness in your brain and throughout your body.

Yet, despite the two cannabinoids coming from the same cannabis plant, they are quite different.

CBD is the second most popular cannabinoid, closely following THC. Although research on both compounds is in the early stages, there is much more research for CBD.

Their differences between CBD vs CBN include:

Difference 1: A CBD product has been approved

The FDA has approved a CBD product, Epidiolex, for use to help reduce seizures, especially those caused by epilepsy.

The research for this is more promising than that of CBN, due to the approval by a medical governing body.

It is important to note that this is just one approved use, for one specific product, in one country in the world.

The UK government have not officially approved any product for medical use. However, the approval of Epidiolex by the FDA is a promising sign.

CBD, unlike CBN, is legal in the UK and many other countries in the world.

This makes it safe to buy CBD online and in stores.

CBN is psychoactive, which is why it is currently not legalised in the UK and around the world.

Difference 3: CBD has more research to back it up

It is fair to say that CBD has received significantly more research and recognition for its wellness-promoting benefits. One product has even been FDA approved for reducing epileptic seizures.

Despite much of the research not being officially confirmed, initial reports into CBD look promising for encouraging general wellness compared to CBN which is far less studied.

CBD and CBN are both cannabinoids found in the same plant. For both, research is still in the early stages.

Yet, there is more conclusive evidence to suggest CBD is safe and can boost wellness in the body.

There needs to be more verification from studies to suggest that CBN can be useful for enhancing wellbeing. But so far, research has been positive.

The key difference between CBD vs CBN is that CBD has undergone more research and shown more efficacy for wellbeing – it has also been confirmed by the WHO to be safe.

If you found this article on CBD v CBN useful, you might look to browse our other posts on our blog to learn more about CBD and its potential health benefits. If you’re ready to start trying CBD oil, we have a 30-day happiness guarantee when you buy CBD oil online from our shop!

CBD Oil for Arthritis UK: What you Need to Know

Arthritis is a common joint problem that affects around 350 million people worldwide at any given time. There are various ways to manage arthritis and

It is not an exaggeration to say that the UK CBD industry has exploded in recent years.  Increasing awareness around CBD oil coupled with changes to

What You Should Know About CBD Oil for Pain Relief

As the popularity of CBD oil continues to grow, quite rapidly, more and more people are being overwhelmed and somewhat confused by its health benefits.

CBD Oil for Anxiety: What You Need to Know

Anxiety is a common mental health issue that affects millions of people worldwide.  Although it can be difficult to treat, it can be easier to

CBD For Sleep: How Does CBD Oil Aid a Good Night’s Rest?

When people struggle to get enough sleep, they are often willing to do anything to get a restful night’s sleep. From meditation, reading and melatonin 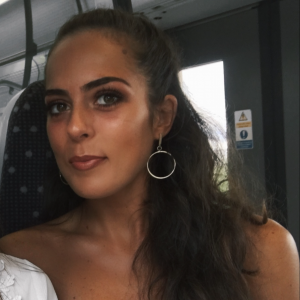 I'm a writer and blogger based in the U.K., writing about all things natural health with a special interest in how CBD can help bring about positive change.

CBG vs CBD: The Differences

How Long Does CBD Take to Work?

How Does CBD Oil Affect the Kidneys?

This product is not for use by or sale to persons under the age of 18. It should not be used if you are pregnant or nursing. Consult with a physician before use if you have a serious medical condition or use prescription medications (CBD’s interaction with prescription drugs may cause side effects). A Doctor’s advice should be sought before using this and any supplemental dietary product. This product is not intended to diagnose, treat, cure or prevent any disease. By using this site you agree to follow the Privacy Policy and all Terms & Conditions printed on this site.